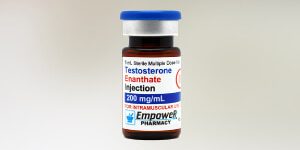 Men suffering from low testosterone level feature a number of symptoms. Although the symptoms are not life threatening, they affect the mental, physical and sexual well-being in various ways and should be treated. The symptoms of low testosterone include:

For low testosterone treatment, the standard Testosterone Enanthate dosage will be in between 100-200mg in every 7 to 10 days. Some physicians may split the total recommended dosage into two and administer them in 5 days. In a rare case, some physician may prescribe double dosage or 200-400 mg for every 2-4 weeks. The total amount of treatment is not defined as most men who need testosterone will have to use them for life.

However, the high dosage is divided into two equal dosages and administered twice a week.

Although the dosage can go beyond 500 per week, most men find the 500 range to be very effective. Although 600-1000 mg per week range is still tolerated and can be controlled, the 1000 mark increases the probability of adverse effects. The amount of dosage that a man can tolerate and controlled varies from one person to another. However, studies have shown that 1000 mg per week guarantee side effects among most men.

Possible side effects of Testosterone Enanthate:

Although there are some few side effects of Testosterone Enanthate use have been reported among users, most of them are extremely easy to avoid. The probability of health issues occurring among the low-level patient is extremely low as most patients will only be replacing what they are lacking and nothing more. However, the probability of side effects occurring among the athlete is very high but is still controllable. Most studies show that most men can tolerate a high level of testosterone, but due to different conditions different people have a different level of sensitivity.

Testosterone Enanthate is a simple anabolic steroid but very effective anabolic steroid. It is very effective and has shown high tolerance among most men. The use of Testosterone can radically transform life, and it is possible for a middle-aged man to feel like he is in the twenties again. Although the medication among athletes may result in some side effects, the side effects can be easily avoided or controlled.

How to add muscle mass at a rapid rate with Dianabol?
27 January 2017

All You Should Know About Testosterone Cypionate
26 January 2017

Learn How to use Deca Durabolin correctly
18 January 2017