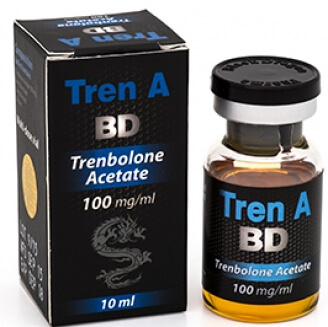 The Trenbolone molecule of Parabolan is a great product that does not need to be tested anymore. Parabolan provides muscle mass gain both qualitative and quantitative. It offers impressive vasculature.

Trenbolone acetate is an ester derivative of unrefined Trenbolone. Ester derivatives of steroids are preferred to administer for a simple reason of increasing it effective half life. When Trenbolone Acetate is administered in body, plasma lipases cut the ester group in the bloodstream leaving free trenbolone. Bodybuilders and athletes have a belief that Trenbolone Acetate has a high potential to help in getting increased body mass more effectively than by weight training alone. The DEA has classified Trenbolone as a schedule III drug whereas in Canada it is classified as a Schedule 4 drug and a class C drug with no penalty for personal use or possession in the United Kingdom.

Trenbolone acetate has a popular nickname “Fina” among its users since injectible it is mostly prepared from Finaplix H pellets. Finaplix H is an ear-implant used by cattle ranchers to maintain the weight of cattle prior to shipping to slaughter. Studies have confirmed that Trenbolone improves muscle mass substantially in cattle. The binding affinity for the androgen receptor of Trenbolone Acetate is five times as high as that of testosterone. Once it is metabolized, the drug is quite effective increasing nitrogen uptake by muscles which increases the rate of protein synthesis. It has also shown the secondary effects of stimulating appetite and decreasing the rate of catabolism. This is the property of all anabolic steroids.

Trenbolone Acetate has been quite popular with anabolic steroid users as it is not metabolized by aromatase or 5a reductase into estrogenic compounds. This product has a tendency to causes gene expression with the androgen receptor as done by DHT. This indicates that it causes an increment in male secondary sex characteristics without the need to convert to DHT. Trenbolone Acetate is the most amazing steroid of all the anabolic androgenic steroids. It is true since Acetate variant is easy to control, much stable and on a milligram for milligram base it is the most strong Trenbolone of all. This product is a versatile steroid. As is the case with testosterone. Trenbolone Acetate is most potent for any cycle for any purpose and gives optimum results. It is an amazing anabolic steroid. Initially it was thought to be working towards promoting mass and strength. But its versatility gradually was found to be truly amazing. Trenbolone-Acetate has in a short time become staple in almost any serious cutting cycle effectively that places it in the ranks of the most desirable and sought after steroids the world over. For the off-season athletes and bodybuilders this is one of the most effective anabolic steroids for promoting growth as well as increasing strength.

When it is coupled with testosterone it becomes a strongly powerful stack. It not only provides growth and strength but this steroid does not aromatize which means any weight gains experienced due to Trenbolone Acetate is purely lean muscle mass. Gains made by this product are more stable and of prolonged nature as compared to steroids having water retention properties. That makes Trenbolone Acetate the best choice for bodybuilder and athletes.