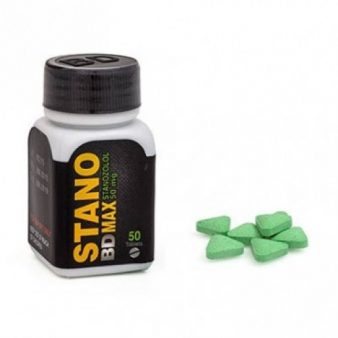 Also known under the name of Stanozolol, Winstrol molecule or in the bodybuilding jargon as Winny. It can also be taken for lean mass gain, for a weight loss diet or a slimming. Everything will depend on how it will be used and the product (s) to combine with it. Alone it does not demand recovery because it does not aromatize and is not suppressive.

Stano By Black Dragon (Stanozolol) is a synthetic anabolic steroid derived from Dihydro-Testosterone. It was developed by Winthrop Laboratories (Sterling Drug) in 1962, and has been approved by the FDA for human use.

Unlike most injectable anabolic steroids, Stanozolol is not esterified and is sold as an aqueous suspension, or in oral tablet form. The drug has a high oral bio availability, which allows the hormone to survive first-pass liver metabolism when ingested. It is because of this that Stanozolol is also sold in tablet form.

Stanozolol has been used in both animal and human patients for a number of conditions. In humans, it has been demonstrated to be successful in treating anaemia and hereditary angioedema. Veterinarians may prescribe the drug to improve muscle growth, red blood cell production, increase bone density and stimulate the appetite of debilitated or weakened animals.

Stano or Stanozolol is one of the anabolic steroids commonly used as a performance enhancing drug and is banned from use in sports competition under the auspices of the International Association of Athletics Federations (IAAF) and many other sporting bodies. Additionally, Stanozolol has been used in US horse racing.

Stano (Stanozolol) is commonly used by athletes and bodybuilders alike to lose fat while retaining lean body mass. It is usually used in a “cutting cycle”, to help preserve lean body mass while metabolizing adipose, although it has not been proven conclusively that it has any special fat-burning properties.