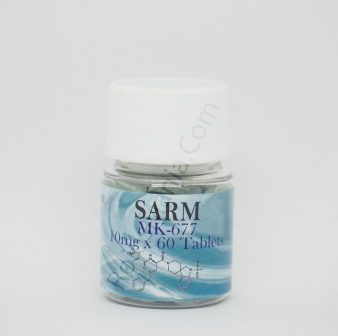 MK 677 is a potent, long-acting, orally-active, selective, and non-peptide agonist of the ghrelin receptor and a growth hormone secretagogue, mimicking the growth hormone-stimulating action of the endogenous hormone ghrelin, leading to increased recovery from injury, improved sleep, reduction of fat tissue, and increased appetite.

MK-677 is also referred to as Ibutamoren or Nutrobal. Don’t get confused, these are all the same compound, just different names.

Even though MK-677 is marketed as a SARM, it is not. It’s actually a growth hormone secretagogue. That’s right, MK-677 does not belong to the SARMs family.
The reason why MK-677 is so special is that it has the ability to stimulate growth hormone levels (GH) and Insulin-like growth factor (IGF-1).

It’s a quite complicated process but what you should know is that MK-677 does not interfere with other biological processes such as natural hormone production. This means that you will experience a boost in GH levels without side effects such as testosterone suppression.

One of the primary benefits you will experience from MK-677 is increased muscle growth. Due to the fact that MK-677 increases GH and IGF-1 levels you will be able to put on size much easier. This has been backed up by science, a lot of user experiences show us that MK-677 does have a positive effect on building muscle tissue.

Another benefit you can expect from MK-677 is an improved sleep pattern. It has been proven that MK-677 improves sleep quality.
We all know a good night rest plays a crucial role in recovery, with MK-677 you will get plenty of sleep. If you are having trouble getting quality rest at night, MK-677 might help you fix this.

Growth hormone and IGF-1 have a positive impact on the skin, hair, and nails. GH has been proven to interact with the skin cells.

This benefit is solely based on anecdotal experiences. Some users claim that MK-677 helped them accelerate fat loss.

20 to 30mg is the most optimal dosage, what’s even more important than the dosage is the length of the cycle.

It’s extremely important that MK-677 should be taken for a longer period of time. The growth hormone levels have to gradually build up in your body, which can take up to several weeks before you start feeling the effects.

The Mk-677 dosages we recommends are as following:

You will not need a Post Cycle Therapy (PCT) for MK-677 as it does not interfere with any hormones.

DOES MK-677 HAVE SIDE EFFECTS?

Because MK-677 raises growth hormone levels, you can expect the following side effects:

These side effects are mainly caused by the elevated growth hormone levels in the body. Another side effect worth mentioning is increased appetite. Some users can get extremely hunger when using MK-677. Keep in mind, not everybody seems to have these side effects.