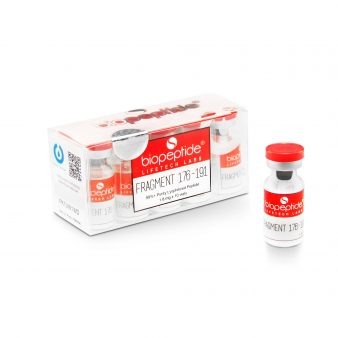 Biopeptide Fragment 176-191 by Lifetech Labs is a fragment of an HGH peptide. It has been developed to isolate specific characteristics of fat loss with growth hormone. Its profile is ideal for athletes not seeking growth but maximum efficiency with losing body fat suitable for a dry program.

HGH Fragment 176-191 is known as the most powerful peptide for weight loss. It’s a fragment of human growth hormone and helps burn fat mass. It is known for reducing body fat, particularly in the stomach. HGH Fragment 176-191 can regulate fat metabolism without causing insulin problems or other undesirable side effects.

It is recommended to take HGH FRAG 176-191 for three months, and above all do not extend usage beyond six months.

To get the most out of HGH FRAG 176-191, it is advised to take a dose of 600mcg per day divided in two injections. This can be 300mcg before working out in the morning and 300mcg before lunch, or in the evening before before sleeping, etc.