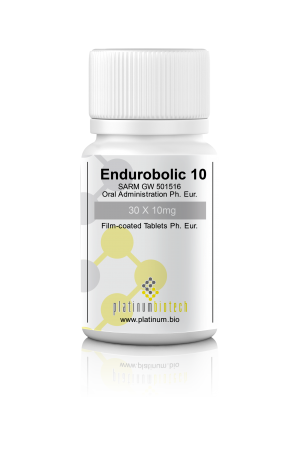 Endurobolic 10 (GW 501516) was primarily developed to treat obesity, diabetes, lipid strain, and heart health problems. As a matter of fact, those who run blood work will notice that Endurobolic 10 will effectively aid with lipid strain, and cholesterol levels will improve substantially. It can also increase endurance during physical activity and improve the lose of fat tissue during exercise.

Endurobolic 10 is also known as GW-501516, some people might also refer to it as Endurobol, it was originally developed as a safe alternative for heart and metabolic conditions.Due to Endurobolic 10 having an extremely positive impact on metabolism and burning fat it has gotten popular among competitive athletes. There is a lot of confusion about this compound, most people think that it is a SARM, but it is actually a PPARδ receptor agonist.

Endurobolic 10 mechanisms are very similar to those of SARM, this chemical allows the body to help regulate fatty acid metabolism which is absolutely amazing.

As previously mentioned, Endurobolic 10 is a PPARδ receptor agonist and not to be confused with a SARM. Basically, what it does is that it activates the protein PPAR-delta in the cells of the body. PPAR-delta is a sensor for fatty acids, which are found in muscles. Once the PPAR-delta has been switched on, your ability to burn fat increases.

Endurobolic 10 is a very promising compound that has insane fat burning abilities. It has the ability to enhance your workouts as no other drug does. The fact that these positive effects have been backed up by studies makes it even better.

The recommanded dosages are between 10 to 20mg per day.

You will see users that take up to 30mg of GW-501516 a day. Typically people who do so are very experienced and have run it multiple times in the past. we recommend to stay away from higher dosages because there is minimal information available.

Endurobolic 10 (GW-501516) has a half-life of roughly 12-24 hours. This means you will have to dose it twice a day. Most people dose it once in the morning and once in the evening, this will keep levels in the body stable.

The length of the cycle should be no more than 6-8 weeks. Once again, you will probably see some users take it for more than 8 weeks but that is quite a risk. We would always suggest to play it safe and keep the dosage low and the cycle length relatively short.

GW501516 does not require a PCT, you can simply discontinue it after the cycle has been finished.

Some people will also stack this compound with Ostarine and Endurobolic 10 to create a SARMs Stack. Mainly because they are very effective for preserving muscle.

We are unable to find any user review that experienced negative side effects from GW 501516, no studies have confirmed that GW 501516 actually has any side effects in humans at all, but that can still change of course. If you do plan to experiment with this compound make sure to keep within the advised dosage guidelines.