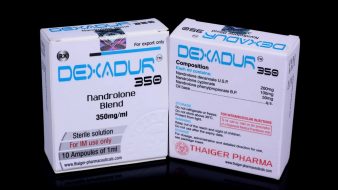 Dexadur 350 Thaiger-Pharma is a Mix of Nandrolone. This product is very good for mass gain.

The Dexadur Thaiger 350 is a incorporation of 4 nandrolone esters whose composition is:

Worldwide “Deca” (Dexadur 350) is one of the most widely used anabolic steroids. Its popularity is due to the simple fact that it exhibits many very favorable properties. Structurally Nandrolone is very similar to Testosterone, although it lacks a carbon atom at the 19th position (hence its other name 19-Nortestosterone). The resulting structure is a steroid that exhibits much weaker androgenic properties than Testosterone. Of primary interest is the fact that Nandrolone will not break down to a more potent metabolite in androgen target tissues. You may remember this is a significant problem with Testosterone. Although Nandrolone does undergo reduction via the same (5-alpha reductase) enzyme that produces DHT from testosterone, the result in this case is Dihydronandrolone. This metabolite is weaker than the parent Nandrolones, and is far less likely to cause unwanted androgenic side effects. Strong occurrences of oily skin, acne, body/facial hair growth and hair loss occur very rarely. It is however possible for androgenic activity to become apparent with this or any steroid, but with Dexadur 350 higher than normal doses are usually responsible.

Dexadur 350 does however, have an extremely lower tendency for estrogen conversion. For comparison, the rate has been estimated to be only about 20% of that seen with Testosterones. This is because while the liver can convert Nandrolone to estradiol, in other more active sites of steroid aromatization such as adipose tissue Nandrolone is far less open to this process’. Consequently estrogen related side effects are a much lower concern with this drug. An anti-estrogen is likewise rarely needed with Dexadur 350, gynecomastia only a worry among sensitive individuals. At the same time water retention is not a usual concern. This effect can occur however, but is most often related to higher dosages. The addition of Proviron and/or Nolvadex should prove sufficient enough to significantly reduce any occurrence. Clearly Dexadur 350 is a very safe choice among steroids. Actually, many consider it to be the best overall steroid for a man to use when weighing the side effects and results. It should also be noted that in HIV studies, Dexadur 350 has been shown not only to be effective at safely bringing up the lean body weight of patient, but also to be beneficial to the immune system.